Jesus is a Badass

In the modern era, we cannot think of a better way to describe Jesus other then by simply calling him a badass.  Every single one of his miracles; turning water into wine, raising the dead, healing the blind, the sick, the lame, the deaf, walking on water, etc are examples of Jesus being a complete badass.  And these are just a few of the many miracles Jesus performed during his short time on earth as a human.  He also flipped the tables of money changers & other people doing non-righteous activities in the temple courts. 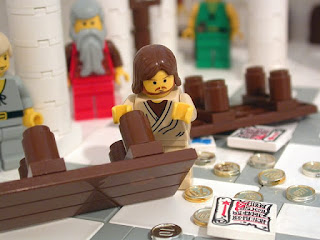 Since we choose to define Jesus in the modern era as being a badass, we feel it is important to appropriately define the modern day meaning of badass as it applies to Jesus.  The best place to turn for modern day meanings is to the Urban Dictionary.  In it there are several descriptions of someone who is badass, but the definition closest to our interpretation is as follows:  adj. 1. A general term used to describe behavior that is fearless, authentic, compassionate, and ethical. 2. Well above the social standard for "normal" behavior.  Jesus absolutely demonstrated behavior that is fearless, authentic, compassionate & ethical!  Did he not?  There really can be no debate about this.  We could even take it a step further then & say that almost EVERYTHING that Jesus did was badass!  Not only was Jesus completely amazing & awesome in everything that he did, but he was a true badass because he also follows all of the unwritten rules of being a badass as defined in the Urban Dictionary:

In a true sense of the word, Jesus is a badass.  His personality, his actions, his miracles, his love, his mercy; every part of him was, is & will always be badass!

Posted by Rowdy Jesus, LLC at 9:36 AM No comments:

‘And God looked upon the earth, and, behold, it was corrupt' (Genesis 6:12).  Noah, the grandson of Methuselah and only ten generations removed from that of Adam himself, was chosen by God as the one man to continue His legacy of mankind while God eradicated the evilness & disobedience of early humans.  Just imagine that for a moment… What would your reaction be if God told you he was going to destroy the majority of our world and YOU would be the one person responsible for its regeneration?   You think your life is filled with stress & pressure now?  That’s nothing in comparison to the weight on Noah’s shoulders.  No wonder the dude created the first vineyard and ended up drunk & naked in his tent!  I would have been so overcome with fear & anxiety that I never would have left that tent.  But Noah was different; he got out of that tent, stopped getting drunk, & fulfilled God’s command.  He was brave.  He was bold.  He was Rowdy. 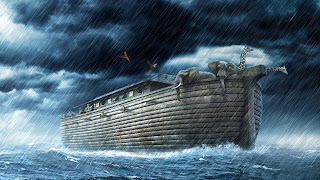 Not only was Noah responsible for constructing a massive ship, which took 100 years to build & was more then 1 ½ football fields in length, but he was also tasked to preach to the people on earth and ask them to repent of their sins.  He endlessly preached & warned of the coming flood.  Many people heard his words, but no one truly listened.  And why should they?  Humans at that time had never seen rain.  Humans, crops, and animals got their water from rivers, natural springs, and mists.   In those days no one had ever seen rain before; so why would they ever believe some old man proclaiming that the ‘windows of heaven’ would open up and pour water down on them?

In many ways, Noah & his Ark are a great parallel & forerunner to that of Jesus Christ.  In Noah’s time, the only way to keep living was to believe what Noah was saying and get on the Ark.  And the only way to eternal living is to believe in Jesus Christ.  Additionally, just as Christ was sealed in his tomb after His crucifixion, so was Noah & his family sealed up in the ark only to emerge months later.  Noah was the hope for humanity after the Flood just as Jesus became the hope for all humanity after His resurrection.

Noah’s steadfast faith & belief in the Lord will forever be an inspiration to all of us Christians.

Noah was a Rowdy Christian!


Next Blog Article: Jesus is a Badass

Are You a Rowdy Christian?

Are you? The article title asks one simple question, however; it is not quite as simple a question to answer. First, the question asks if you are rowdy. Then it asks you if you are a Christian. These two questions must first be answered before you can answer the main question definitively.  This is our first blog entry, so we will spend just a few sentences later on introducing you to us. sdfds 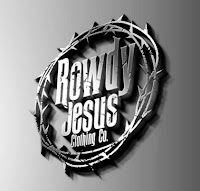 We love complex questions like this; questions that are designed to encourage introspection, not to provoke an immediate yes or no response. On the surface these kinds of questions appear to be very simple, narrowly-framed, and intriguing; which they are indeed, but what lies beneath is something more dynamic. Instead of exploring this question into the philosophical/theological abyss, let’s just simply determine that right now as long as you can identify with being either “rowdy” or a “Christian," then this is what matters to us.

Our blog, just like our clothing company, will appeal to a rowdy Christian audience; Christians who connect w/ and are proud of the rowdy side of Jesus & the other characters in the Bible, but don’t have a lot of Christian apparel options they identify with. There are also many non-Christians in this world who will enjoy our brand, as long as they have an open mind and a little bit of rowdy in them.

Thousands witnessed Jesus perform miracle after miracle. Many of them still did not believe in Him right away, but they were attracted to Him nonetheless. Then after seeing enough to be convinced, they admitted He was the one true God. Before they were able to call Him their God though, they were attracted to Jesus the man first, not the religion. Our aim as a clothing company is simply to re-introduce you to Jesus as the man we believe him to be: a rowdy, influential, shocking, provocative, badass, S.O.G. (Son Of God).

Before we describe the structure and thematic elements of our blog, let us define for you our definition of the word: rowdy. First, here is what Webster’s definition is: coarse or boisterous in behavior. Short and sweet; we love it. We agree with Webster’s, but we want to add some more layers of flavor to create our own take on rowdy. To us, someone who is rowdy is edgy, shocking, influential, or badass; EXACTLY who Jesus is. He shocked the world with his rowdy behavior. Rowdy is cool. And that is exactly what we will be writing about: Christians of Biblical, historical, or modern day significance who are edgy, shocking or influential.


For each blog entry, we will write about amazing instances of Christian people who connected with and modeled one or more of Jesus’ rowdy character traits. Because if God has made us all in His image, then that MUST mean all things cool, attractive, and rowdy about people in this world can only be possible because God and His son, Jesus, are cool, attractive and rowdy themselves. So, are you rowdy? Are you a Christian? Are you a rowdy Christian?